The Cuilcagh region has the densest distribution of glacial erratic boulders in Ireland – they are at their most dense in the Cavan Burren. Historically these boulders provided the raw material for quarrying of stones for use in buildings and walls – which usually involved splitting/breaking the boulders.

However the Burren-Marlbank project observed modifications to prominent boulders which could not be explained in terms of quarrying activity. It was clear that many modifications were efforts in enhancing the natural monumental aspects of these truly spectacular features. The problem was how to work out which features were natural and which were human-made.

The evidence of human modification was based on a number of factors, for example the sheer number of similar features on so many different boulders, the presence of multiple modifications and the presence of Rock Art on critical examples, and most importantly, by the discovery of a large number of ‘Evidence’ boulders.

There are seven significant modifications that are commonly observed on boulder monuments, quite often several modifications can be observed on the same boulder – this provides strong evidence of human intervention.

These animations show the seven modifications: 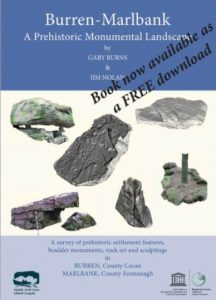